Driving? Put Down That Phone

Over the past decade, distracted driving has become one of the leading causes of vehicle crashes on our nation’s roads. We, Village of Schiller Park, are encouraging drivers to put down the phone and remember: U Drive. U Text. U Pay. In support of April’s National Distracted Driving Awareness Month, the Schiller Park Police Department will be partnering with the U.S. Department of Transportation’s National Highway Traffic Safety Administration (NHTSA) from April 1st to April 30th, 2019, for the national U Drive. U Text. U Pay. high-visibility enforcement effort. The goal of the campaign is to step up enforcement efforts to catch distracted drivers and enforce distracted-driving laws.

Over the years, millennials have become the biggest texting-while-driving offenders, using their cell phones to talk, text, and scroll through social media while behind the wheel. According to NHTSA, young drivers 16- to 24-years-old have been observed using handheld electronic devices while driving at higher rates than older drivers since 2007. In fact, in 2017, 8 percent of people killed in teen (15-19) driving crashes died when those teen drivers were distracted at the times of the crashes. And female drivers are most at-risk for being involved in a fatal crash involving a distracted driver.

“It seems that every day, you can look out of your car’s window and see a driver using their cell phone,” said Officer Cavalieri. “People know texting and driving is dangerous and illegal, but they do it anyway, and it puts others at risk. Beginning on April 1st, you will see increased law enforcement efforts, as officers will be stopping and ticketing anyone who is caught texting and driving. If you text and drive, you will pay.”

An analysis by the AAA Foundation of 2009-2012 data found that while more than 80 percent of drivers believed it was completely unacceptable for a motorist to text behind the wheel, more than a third of those same drivers admitted to reading text messages while operating a passenger motor vehicle themselves.

“We all have cell phones, and we’re all on them all the time,” said Officer Cavalieri. “But when you drive, you have one responsibility: Drive safely and responsibly. Do the right thing—put your phone away when you get behind the wheel. The bottom line is this: If your attention is anywhere other than on the road, you’re driving distracted, and you’re driving dangerous. Save yourself the embarrassment and expense of getting pulled over. Plus, you just may save someone’s life.”

The Schiller Park Police Department and NHTSA urge you to put your phone down when you get behind the wheel. If you need to text, then pull over and do not drive while doing so. If you’re driving, follow these steps for a safe driving experience:

• If you are expecting a text message or need to send one, pull over and park your car in a safe location. Once you are safely off the road and parked, it is safe to text.

• Designate your passenger as your “designated texter.” Allow them access to your phone to respond to calls or messages.

• Do not engage in social media scrolling or messaging while driving. Cell phone use can be habit-forming. Struggling to not text and drive? Put the cell phone in the trunk, glove box, or back seat of the vehicle until you arrive at your destination.

Texting while driving is dangerous and illegal. Break the cycle. Remember: U Drive. U Text. U Pay. 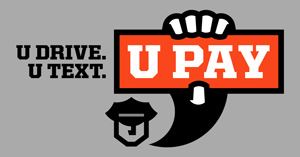